Torches have improved hugely since we got our first huskies. They’re now alot brighter, lighter and the batteries last much much longer. We’ve tried many different brands of torch and now just stick with Petzl. I think Petzl call them ‘head lamps’, which must be a throw back to their origins when they invented the concept of putting a lamp battery case on a head strap. I’m pretty sure we could open a mini museum illustrating the evolution of the Petzl head torch over the last decade with all the versions we own. We use the torches for walking the dogs in winter evenings, sorting stuff out at races in the dark or just finding our way back from the pub.

Using a head torch means you have both hands free to get on with what you’re doing and also the light is always in the direction you are looking. The head straps are really comfy and the new LED versions weigh very little and fit in most pockets.

We have two favourite models at the moment. We prefer models with the batteries in the headlamp unit, to keep size down to a minimum. 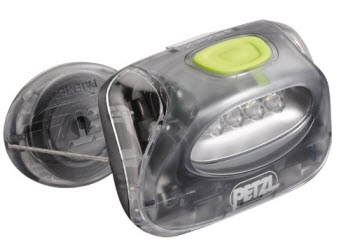 It’s an ultra compact torch that uses a retractable cord instead of a bulky strap. This puppy, really does fit in your pocket and only weighs 69g including batteries. It’s bright enough for walking the dogs and batteries easily last over 50 hours, double if you don’t use the brightest mode and don’t mind a dimmer light. It uses 4 LEDs.

I love this torch. At first I was worried it would feel like a cheese wire around your head – but it’s not. It feels different, cos you don’t have a big head strap that the orther torches have. It stays in place and the cord quickly retracts into it’s casing.

The lamp has three modes, maximum, economic and strobe. First push of the rubbery button switches on maximum mode, another push gives you economic and the third push gives you strobe. We have no need for a strobe. Torch came with batteries and fitting them is simple.

Still a compact head torch, but brighter than the zipka and includes a lense filter than either focuses the light into a spot or difuses it cover more ground. It looks like it’s only now available in desert tan and camouflage colours. I prefer our grey and blue version – but I could live with the camo version.

The torch uses a single LED with three brightness settings (maximum, optimum, economic), plus a 20 second boost and also the usual strobe. We usually use the optimum setting to help with prolonging battery life. The light from this torch has always impressed us. I wouldn’t use it for racing, but is fine for all those other things you do between racing etc. It weighs 100g and has a battery charge indicator that flashes when the batteries need changing.

The lamp unit has a mount that allows you to change the angle of the light, pointing it more up or down, as you need. Some versions include coloured filters for the lenses, but we’ve never had the need. I would think this is our favourite torch at the moment, unless we wanted something really bright and then we’d grab our lovely Mila head torch.

Many places sell Petzls, and plenty of companies copy the style with varying degrees of success. We just stick with Petzl and have never has a problem. Torches are things that you really wouldn’t want it to fail.