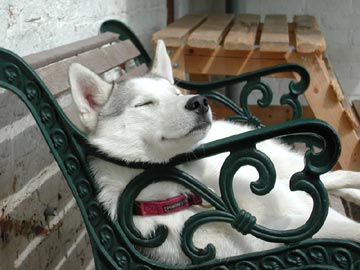 we never intended to show at all, but having done well at a few shows as a puppy, Elvis has continued to do extremely well in the show ring. he won his first CC under Sally Leich at WKC in 2002 and has since won his 2nd CC under Simon Luxmoore in 2005 and gained his title at Southern Counties 2006 under Lisa Tebay. he also has 8 RCCs from Lisa Tebay, Penny Evans, Sheila Luxmoore, Ali Koops and Sue Blake (x2)Chris Barry & Tracey Pittock. his 4th CC, under Ali Koops, was gained at the first Scottish Siberian Husky Club Championship Show in 2006 where he won Best In Show. his 5th CC was from Penny Evans in 2007. he is now only shown occasionally. a very keen worker, Elvis was placed 3rd in the SHCGB Dual Championship 2002/3 and 2003/04 and 5th in 2004/05 and 2005/06.

for a dog that had no intention of entering the show ring, we were delighted when he became our first champion. Elvis has a lovely nature and doesn’t seem to be phased by anything. well, that was until Mookie turned up and followed him everywhere. in a nutshell – think ‘Forest Gump’ – awesome runner that sees no evil in anything. teamed up with Mookie to run in Guy’s 2 dog team.

we first saw his mum at a local dog show in Leeds. she really caught our eye and that’s how we got talking to her owners, Mark and Bette.

he works effortlessly in harness and screams like a banshee when close to a start line. full of mischief, always pushing to take things from plates and usually needs to hear the word ‘no’ three times before considering a change in behaviour. if he was a child, his favourite game would be ringing door bells and running…. then returning to do it again until caught. 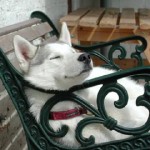 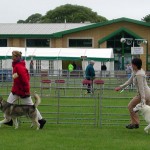 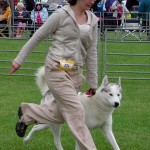 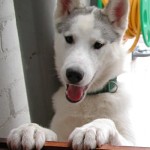 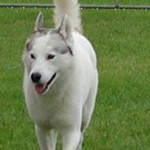 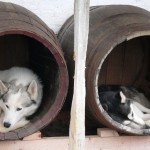 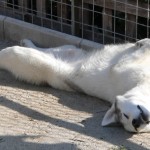