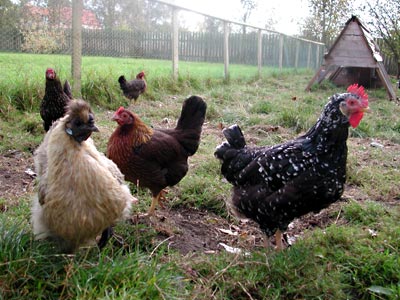 always a standing joke about having hens as bait for any runaway husky, giving you extra time to capture the escapee. hens are cheap and huskies are priceless. we originally had some bog standard rhode island highbreds. not the cuddliest of hens and quite capable of attacking you as you replaced the feeder in the hen run. they didn’t survive beyond the tender age of two. inspired by the pretty hens across the road we went to a hen breeder near Selby to buy something different. we restarted with an Anconna and Silkie. two pretty birds laying white eggs. the Anconna was always partial to cuddle in her early years and used to lay an egg nearly every day. we’ve since added two Wellsummers and a Bantham of mixed heritage. the latter seems to be tough as old boots and religiously lays. again, like huskies there is a strict pecking order. they can be quite vicious between themselves and quick to dish out violent punishment. hens are stupid – you understand where the term ‘bird brain’ comes from, when you own hens.